WRITING INTO THEIR HEARTS 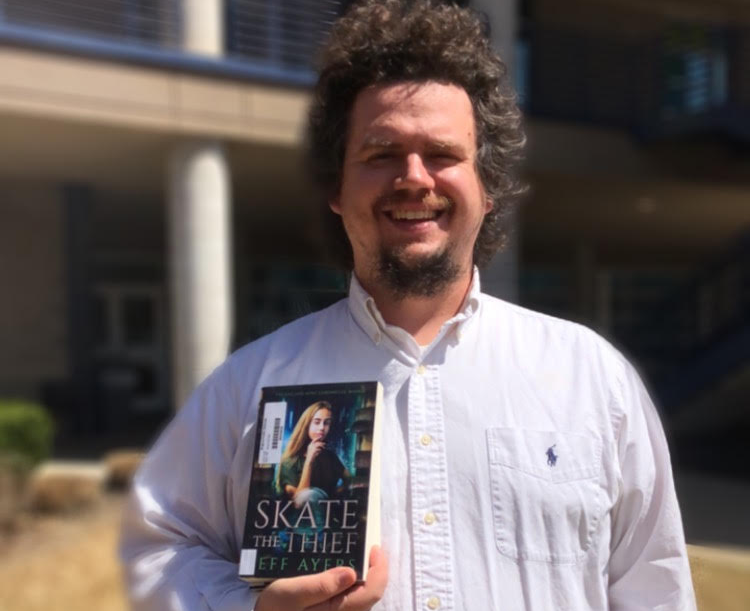 Jeff Ayers, English teacher, published his first novel, “Skate The Thief,” in June of last year. Students may visit the RHS library to check it out.

Ayers graduated from the University of Arkansas in 2011 through the Masters of Arts and Teaching program, allowing him to get certified to teach and earn his master’s degree all in one year. In 2013, Ayers joined Rogers, teaching English for six year continuing.

His teaching style developed “through trial and error,” said Ayers. “It’s a combination of how I was taught, what I was taught in college and then practicing doing it.”

Ayers said that his favorite thing about teaching is the students themselves. He wants to help but it’s not always as easy a task as it seems, he said.

“Some parts of it are not always fun. Sometimes parents can be difficult, but the reason I do it is that I don’t want to be doing anything else when I can help the students,” said Ayers.

Ayers said that teachers can understand a lot of things by being kind. He believes teachers should be patient with students, and also believes part of his job as a teacher is to make things as interesting as possible so that students will want to learn.

“You can be the best planner, you can be organized, but if you are not kind then the students will not want to learn. I don’t know if that’s the most important thing but that is an important thing. If you are relying on other people to make things interesting for you before you learn them, you are not going to learn much. Things are out there already for you to learn that are interesting and if I can get more students to realize that, then I think we would see an explosion of learning,” Ayers said.

Although it is difficult to make things interesting for others to want to learn, Ayers is still patient and strives for everyone to achieve success, especially during this sudden hardship of the COVID-19 pandemic.

“Students not being here is hard, just having them out of the room is difficult. The distance we have to maintain is hard. The masks are hard. But I think the most difficult thing for me is the revolving door of students being in and out, and I don’t know how much they are learning because of the participation that goes way down – that is probably the hardest thing,” Ayers said.

Similar to many, his wife has a difficulty separating school and work from home, Ayers said.

“She does virtual teaching,” he said. “She is struggling too. Before, it was work and home; now it’s happening in the same place and it’s hard to switch.”

Brittany Ayers is a kindergarten teacher and the high school sweetheart of Jeff Ayers. The couple has been together for 16 years and married for 11 years. Inspired by his wife, Ayers wrote a young adult fantasy novel. He began writing it in October of 2017. ‘Skate The Thief’ was released on June 2 of last year.

“It was an idea that had been rattling around in my head, after a conversation I had with a  friend,” Ayers said. “We had played some video game and one of us stabbed the other and mentioned ‘That didn’t hurt’ and that got me thinking about what if you stabbed someone and it didn’t hurt? How would that happen? It just sort of brewed from there,” Ayers said.

One of Ayers professors from his teaching program said in a press release that he was proud of his former student.

“Jeff was a terrific student in the program. It’s great to see his passion for writing – both in developing it in his students and in being a writer himself – come to fruition in this book,” Dr. Christian Goering said.

If Ayers was not a teacher, he said he would want to be a writer. He wants to also invite students to join his creative writing course for the 2021-2022 school year. He said he feels students should get more opportunities to write for fun than he had during his education growing up.

“I want them to sign up for creative writing. I’m hoping to get at least 40 students signed up so that it won’t be compressed all down to one semester,” Ayers said.