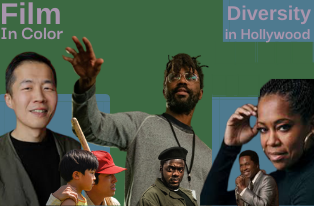 Judas and the Black Messiah and Minari each walked away with an Oscar, and One Night in Miami was nominated for three.

With having to adapt to a wave of new rules and regulations surrounding movie production, the entire film industry has undergone massive changes over the last year. However, one of the most necessary changes has been continuously building momentum for decades: representation. Ever since the birth of Hollywood as we know it, people of color in the industry have been pushed to the sidelines. Recent years have started to open up new opportunities, and the spotlight has slowly begun to shine the light on everyone.

This film season has also proved to be a successful one for many black actors. British actors Daniel Kaluuya and John Boyega won the best supporting actor awards in film and television, respectively, and Andra Day won best film actress for her role as Billie Holiday. Chadwick Boseman was posthumously awarded the best film actor award. As for the Oscars, this year includes nine nominees of color spanning several categories, also making it the first year the best actor category hasn’t had a white majority.

“We need to communicate our differences too so that we might stretch the boundaries of society and culture,” said actor Steven Yeun in conversation with Riz Ahmed. Both men have made history with their recent nominations in the Oscars’ best actor category; Yeun is the first Asian-American actor of Korean descent to be nominated for the category, and Ahmed is the first Muslim in the running for the award.

Though long awaited changes are being seen in the prominence of people of color in front of the camera, there are still drastic changes needed behind the scenes. According to Variety, the Hollywood Foreign Press Association, which is in charge of the Golden Globes, has not had any black members in its 87-member organization in over two decades. Additionally, the HFPA’s foreign film category has faced criticism for including 2020 film Minari, which has mostly Korean dialogue but takes place solely in the United States.

“We will keep trying,” said Meher Tatna, the current president and board chair of the HFPA, in an interview with Variety, “and we will be part of the solution.”