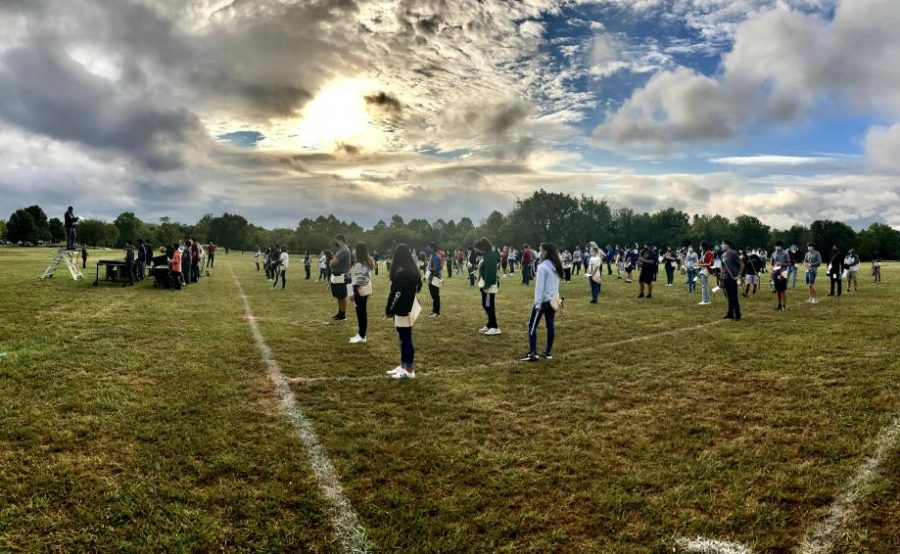 The Mountie Band in a music block preparing for their halftime show performance and assessment.

In an unprecedented year, the Rogers High School Marching Mountaineer Band performed their 2020 Band Assessment without any other bands in attendance.

Though no other bands performed at Rogers High School, other bands, such as the Bentonville Pride and Pride of Heritage, performed at their own schools, in order to better maintain social distancing.

“The Arkansas School Band and Orchestra Association voted to have traveling judging panels for this year’s region marching assessments,“ said Patrice Brown, director of bands at RHS. “It would not have been possible to invite other bands, even if all bands were abiding by the ADH music guidelines.”

Previously, the Mountie band had been preparing to travel to Rogers Heritage for the War Eagle Classics marching band competition, as well as two new competitions: the Bentonville Invitational and the ASBOA Marching Band Competition in Little Rock. Due to the pandemic, however, the band had to call off all three competitions.

Despite these setbacks, the Mountie band still “plans to continue attending the War Eagle Classic and add a couple more competitions to [their] schedule,” Brown said.

But even without attending the three competitions, several RHS band students thought that the band assessment went well.

“The assessment was great. I was happy with the performance despite the abbreviated season,” said Chris Ferguson, 10.

With any event happening during the pandemic, masks are mandated and band is no exception. Some students complained about how the masks made it difficult to pop their horns up and to adjust their instruments quickly, especially those who played instruments with a reed.

“I didn’t like having to wear the mask,” Ferguson said. “It was a hard adjustment and many reeds got chipped in the process.”

There was an upside, however, as the band continued to deliver superior ratings, even in a pandemic.

“I was thrilled that the band had an opportunity to perform for assessment,” said Brown. “We have a long-standing tradition of receiving superior ratings with the marching band, and I’m happy we could provide the chance to get assessed.”